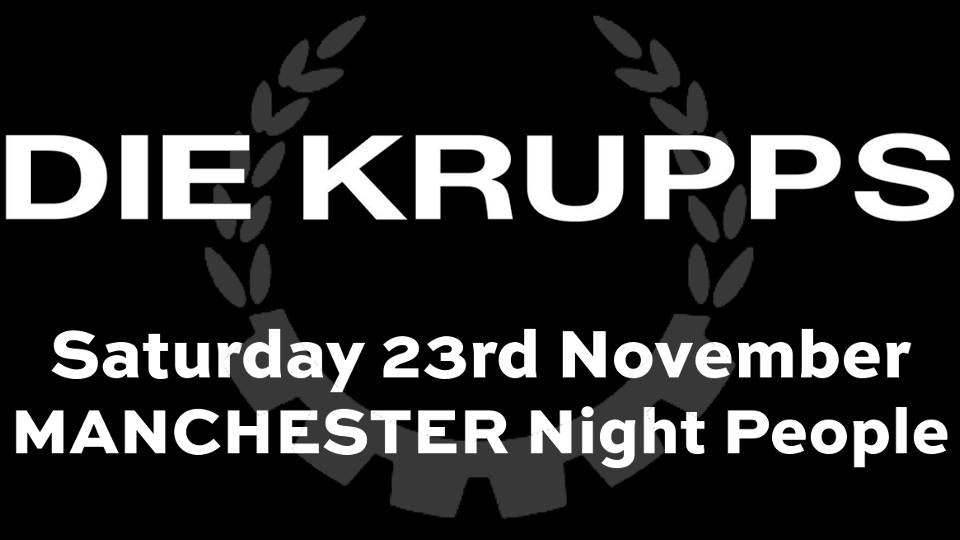 DIE KRUPPS BIOGRAPHY:Long before RAMMSTEIN dominated the Industrial Metal wastelands of today, the original Metal Machine Music Maestros DIE KRUPPS were forging a new style of Industrial Machine music, they were formed in Düsseldorf in 1980 by Juergen Engler and Ralf Dorper. There’s no question that German bands like Die Krupps and Einsturzede Neubatten were having an ever bigger influence on the burgeoning synth and metal scenes most notably with acts like Depeche Mode, Nitzer Ebb, Ministry and Rammstein. Over the years they have produced krautrock-tinged metalbashing industrial, old-school ebm, industrial electro and, most recently, industrial metal/neue deutsche härte.The band’s name comes from the Krupp dynasty – one of pre-war Germany´s main industrial families. This name was apparently chosen for its industrial connotations, as the band is strongly anti-Nazi. In some interviews the band stated that Visconti´s movie “The Damned” – a depiction of the fictitious German industrial dynasty of the Essenbecks – was the main inspiration.Die Krupps’s debut EP, 1981’s Stahlwerkssymphony, was in the vein of metal-on-metal industrial acts like Einstürzende Neubauten. Their following album, 1982’s Volle Kraft Voraus, combined the industrial sound of their debut with electronic rhythms similar to DAF. In 1984, the group released their first English-language album, Entering the Arena, which combined grand, orchestral arrangements with their trademark metallic percussion and a more conventional synthpop sound. Doerper left to join Propaganda, and Die Krupps went on hiatus for a few years. In 1989, they collaborated with Nitzer Ebb – a band their sound had clearly influenced – to remake Volle Kraft Voraus’s “Wahre Arbeit, Wahrer Lohn” as “The Machineries of Joy.” The single was a major club hit,and it resparked interest in the band, who followed in 1990 with the now-classic “Germaniac” single.However, Engler had become interested in American and European heavy metal, and subsequent Die Krupps releases would gradually de-emphasize the band’s industrial/electronic origins. A Tribute to Metallica–an album of Metallica cover versions done with only keyboards and samplers–was something of a novelty hit that got the band signed (briefly) to a US major label. In 1992, Engler reunited with Doerper and added some American heavy metal musicians to the lineup, and Die Krupps began to utilize guitars and more sounds derived from heavy metal music, with the release of their albums I and II–The Final Option. During this period, the band had many of their tracks remixed by other artists; singles such as “Fatherland”, “Metal Machine Music”, “To the Hilt”, and “Crossfire” were reworked by artists as diverse as The Sisters of Mercy, Einstürzende Neubautenand Biohazard. These remixes proved more successful than the albums from which they were drawn, as they became staples of mid-90s alternative clubs. Many of these remixes are included on the compilations The Final Remixes and Rings of Steel, as well as their mid-90s singles issued by Cleopatra Records. Particularly notable is a 1996 remix EP they shared with Front Line Assembly, on which each group remixed three songs from the other: while Krupps’s remixes of FLA were typical of the band’s metallic direction, FLA’s Krupps remixes surprisingly highlighted how Die Krupps’s sound still recalled the band’s early electronic work.By 1996’s III–Odyssey of the Mind, the band had almost entirely ditched electronics for a straight metal sound. Following Doerper’s second departure and the release of the even more heavily metal-influenced album “Paradise Now” in 1997, the band disbanded.The band has been well-served by two compilations that highlight their strongest material and the development of the band’s sound: Past Forward 1991-1981, released on Mute’s Grey Area imprint, is a worthy precis of the band’s work up to and including “Germaniac”. Cleopatra’s Metalmorphosis of Die Krupps covers some of the same ground, but includes highlights from their post-Metallica output. While both compilations share several tracks, they usually choose different mixes. Die Krupps played a reunion show at Wave Gothic Treffen festival at 2005 for their 25th anniversary.Expected in fall 2007 are 2 releases to celebrate the 25th anniversary of Die Krupps plus an extra release combining both. The reason to make two different best of albums is because the band wanted to separate its electro years from its metal years. As a result we will get “Too Much History – The Electro Years Vol. 1” and “Too Much History – The Metal Years Vol. 2”, both in digipak format. Next to these two releases there is also the 2CD set “Too Much History” combining both previous mentioned best of compilations.The German electronic pioneers Die Krupps are re-releasing two classic albums “Volle Kraft Voraus” and “I” by the end of August 2008.May 21st, 2012 – Industrie-Mädchen reached top of the DAC! (i.e. Deutsche Alternative Charts)Industrie-Mädchen is the title of the new single, which is a cover version of a song by the German punk band S.Y.P.H., a band Ralf Dörper was member of for a few month in 1979, contributing the vocals to one track of their first EP Viel Feind, viel Ehr.