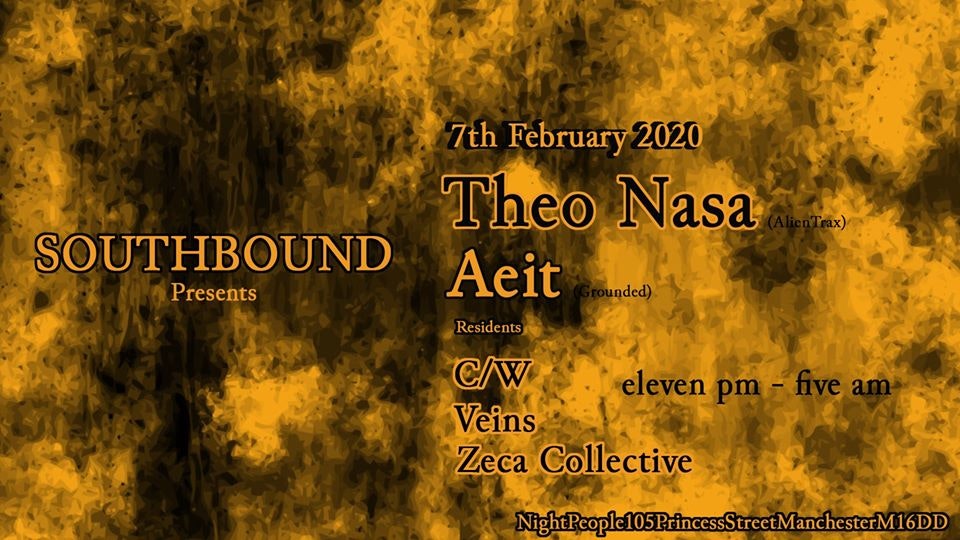 A night of techno destruction. Are you ready?An idea. A dance. A story to tell in the dark.Southbound aims to provide the user a night of madness and uncompromising sounds.In its first instalment, Southbound invites Theo Nasa and Aeit.Making his Manchester Debut under the Southbound banner, Theo Nasa is a unique unorthodox electronic artist from the UK surrounded by the raw elements of South London. An optimist of weird, vague, rough, melodramatic techno with supreme body catching patterns & sounds. He also runs his own label, Aliensound Trax which showcases an anthology of all things unordinary within electronic music. His sound is always on rotation but is now focused on the drive of techno and electronic. With an upcoming release on Arjun Vagale and Ramiro Lopez label, ODD Recordings, Theo Nasa is certainly on his way to deliver them Alien Sounds into the beyond.

AeitAEIT are a DJ and Production Duo aiming to make a name for themselves in the underground music scene. Their love and passion for the more industrial and underground scene truly defines their sound whether in sets or productions of their own. Unrelenting drums, blistering pace, raw atmosphere and aggression. With support from the likes of Dax J, Paula Temple and SNTS, Aeit are a force to be reckoned with.